Notice is hereby given that the Thirtieth Annual General Meeting of the Shareholders of CBZ Holdings Limited will be held through a virtual platform on 22 July 2021 at 0900hours (CAT).

CBZ Holdings yesterday unveiled a $12 million housing project in Victoria Falls that will see the financial institution servicing nearly 1,200 residential stands as part of its efforts to complement Government’s efforts to provide houses. The housing project that would be implemented in Chinotimba and Mkhosana suburbs will see CBZ availing 1,174 residential stands to... Read more » 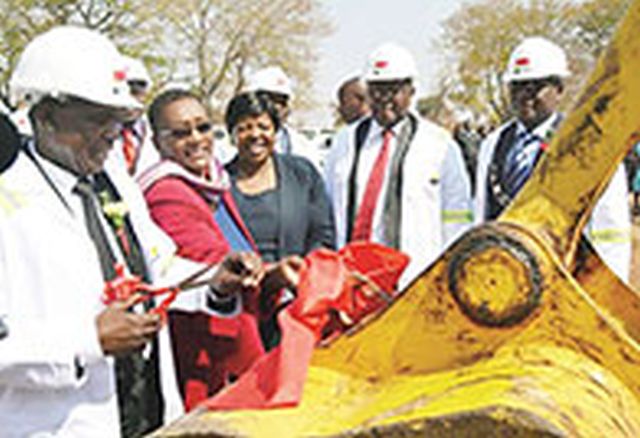 CBZ Holdings yesterday unveiled a $12 million housing project in Victoria Falls that will see the financial institution servicing nearly 1,200 residential stands as part of its efforts to complement Government’s efforts to provide houses.

The housing project that would be implemented in Chinotimba and Mkhosana suburbs will see CBZ availing 1,174 residential stands to low income earners in the resort town.

Of the 1,174 stands, 1,008 will be high density housing and the remaining 166 stands would be for medium density housing, which is in line with the financial institution’s strategy to deliver low cost housing.

Servicing of the land is expected to begin in December. Speaking at the ground breaking ceremony here yesterday the Deputy Minister of Local Government, Public Works and National Housing Cde Christopher Chingosho said the country’s housing backlog of 1, 25 million was a total order that should be confronted collectively in a thorough and robust manner by all stakeholders involved.

This demands that we put our heads together, pull in one direction, leverage resources from the Government, private sector, housing financial institutions and the housing fraternity. This joint venture, therefore bears testimony towards the trajectory or approach and bodes well for posterity, he said.

To date CBZ has channelled $70 million towards various housing projects comprising low, medium and high density schemes as a private developer or in conjunction with municipalities across Zimbabwe.

CBZ developed more than 1,000 stands in Gweru and also serviced residential stands in the Grange, Harare, Chikanga in Mutare, Mbizo in Kwekwe, while plans for similar projects are already underway in Bulawayo and Marondera.

CBZ Holdings chief executive Mr Never Nyemudzo said the Victoria Falls housing project was one of the many housing initiatives that the financial institution was working on as part of its thrust to contribute to housing delivery as espoused in the country’s economic blueprint, ZIM-ASSET.

This early step is one of the many that testifies the Group’s contribution to the economic policies currently in place especially under the infrastructure cluster regarding socio-economic transformation.

We endevour to fulfil the commitment to use our technical and financial expertise to allow for sustainable housing development at a cost that creates space for first time home buyers in and around the town of Victoria Falls,  he said.

The housing waiting list in Victoria Falls currently stands at 15.000, while more than 1,2 million people are in need of houses throughout Zimbabwe.