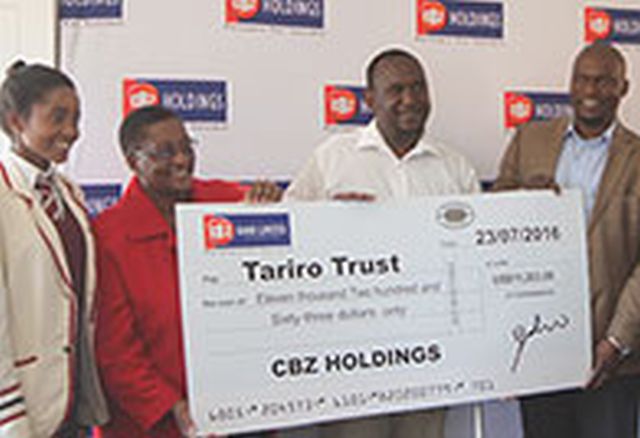 ZIMBABWE largest financial services group by asset base, CBZ Holdings (CBZ), has pledged to further women’s education in the country by unveiling over $11 000 to empower girls.

The group’s chief executive, Never Nyemudzo, on Saturday said empowering and educating girls is one of the best ways to stop poverty from being passed from generation to generation, and can be transformational for entire societies.

Education is a powerful tool that transforms lives…and I hope this school fees donation will go a long way in assisting the children in getting a fair chance at progressing successfully with their endeavours and dreams of a brighter future, he said.

This was after CBZ had paid school fees for 27 girls through Tariro Trust as part of its social investment in the communities it operates.

The girls, who are studying at various schools in the country – from primary to tertiary level – had their fees, uniforms and textbooks among other supplies covered for the whole year.

Tariro Trust is a non-governmental organisation founded in 2003 by Memory Bandera and Jennifer Kyker to address the needs of Zimbabwean teenage girls.

The Trust aims to redress the disparities among teenage girls by providing comprehensive educational support in order to enable them to finish secondary school education.

Nyemudzo said the work being undertaken by the Trust resonated with CBZ’s corporate social responsibility philosophy which speaks loudly of the need to see an increase in educational investment in the societies in which we do business.

Over the past few years, CBZ has assisted organisations such as Danhiko, Mpilo and Harare Hospitals and Matthew Rusike children’s home among others.